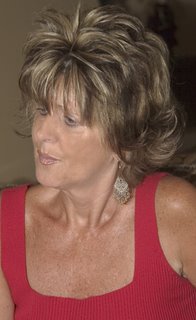 If Mary Gray talks a mile a minute, it’s because she’s a busy woman. Her words are carried by a hurricane force momentum and driven by a purpose: to provide aid to artists suffering in the wake of Hurricane Katrina. Mary Gray is the founder and CEO of MinnesotaHelpers, a non-profit organization dedicated to emergency relief operations. MinnesotaHelpers was founded last year on Sept. 3, 2005 and received its non-profit 501(c)3 status Oct. 6, 2005.

Gray invited us into her Plymouth town home for the interview. The place has served as headquarters for MinnesotaHelpers since its inception. Her home office, corridors, living room, and garage are literally overrun with pieces of art that have been shipped from Mississippi’s devastated coastline as part of MinnesotaHelpers’ Art Share program.

Many of the pieces are created from objects found after Hurricane Katrina hit the area last autumn: window shutters, ravaged dolls, and broken violins. Others simply reflect on how the creative spirit triumphs over human suffering. “Art is healing,” says Gray, and paraphrases a favorite line from Ellis Anderson’s Katrina Chronicles: “We learned early on not to wear bright colors, because the hummingbirds would flock to us because they were starving for nectar.”

Paying it Forward
Gray’s commitment to Minnesota Helpers has been considerable. The program started off as a way for Katrina victims to seek temporary shelter in Minnesota before returning to restore their own towns and neighborhoods. In the first four weeks after starting the organization, she received over 5,000 emails requesting help or offering support.

Though shocked at the volume, Gray was determined to respond to every single email. She got a mere 2-3 hours of sleep each night before going to work in the morning. On Fridays, she’d stay up all night and work through until around four o’clock Sunday morning before crashing. It’s time-consuming work, but Gray feels it’s the least she can do. Gray, who works full time at the law offices of Robin, Thompson, and Doyle, says her employers have been supportive of her efforts. They’ve worked with her on scheduling issues and, if she needs to go somewhere to give a speech, they’re good about giving her time off.

Gray has given more than just time; she has also donated her couch, her dining room set, her television set and numerous other personal belongings to families in need. During the initial relief period, she accepted furniture donations, storing items in her house wherever they would fit. There was a two month period, she tells us, when she just had a narrow path leading from the bedroom to the kitchen; the rest was filled in with things earmarked for Katrina survivors.

This isn’t the first time Gray has sacrificed to help others. After the tsunami devastated large areas of Southeast Asia, she auctioned her own piano off on eBay and used the proceeds to buy two truckloads of beanie-babies. Partnering with a local charity called First Aid for Feelings, she arranged for a shipment to be sent to children recovering from the trauma. Gray has also been an active advocate of gun safety education, meeting with Florida Governor Jeb Bush in 2000, making trips to places like the Columbine High School and Flint, Michigan, where six-year old Kayla Rollins was shot by a fellow classmate.

Gray’s son Adam, the director of Minnesota Helpers, has his hands full with this project as well. He volunteered with a first response team and was deeply impacted by the human suffering he witnessed. Three weeks after Katrina hit, he found himself in the worst-hit sections of New Orleans, watching bodies get hauled out of houses in body bags and hearing air sirens mark the mandatory curfew. Adam now works with the MinnesotaHelpers website, streamlining donation procedures, helping to keep information current, and maintaining the photo archives. He tells us with a wry smile that he has “missed more than a few dates” trying to meet deadlines.

When asked about the sacrifices she and her son have made to help those in need, Gray says, “The Red Cross can only do so much. If something happens to me, I would like to have somebody there to help me. Have you ever heard the phrase, Pay it forward?”

Gray admits to going through moments of feeling selfish, unappreciated, even angry, but then she gets motivated and “fires back up.” On a recent tour of the coastline, she says she felt “embarrassed [when people thanked me] because I felt I hadn’t contributed enough. I felt inadequate - ashamed to have a house, a job, a car….I felt so humbled.” 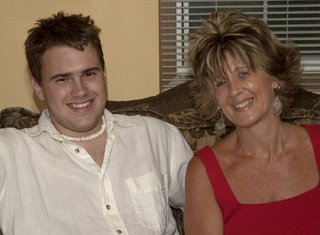 Gray’s biggest frustration right now is that Katrina has become old news. “If it doesn’t bleed,” she says, “it doesn’t lead.” People aren’t interested anymore – “the controversy is over and now Iraq is more of a hot topic.” Faced with dwindling support in terms of time and donations, she says that fighting apathy is the most challenging part.

“When other people quit, you have to keep pushing,” says Gray, who just recently returned from a tour of the Mississippi coastline. “There are still cars up in trees, there. There are still people without homes, people in wheelchairs who can’t get into a FEMA trailer because they don’t have wheelchair accessibility…there are still people waiting on insurance, people who lived in what was considered a no flood zone…I have artists who are paying mortgages on a stone slab, who are now forced to carry insurance on a stone slab.”

“Katrina was the great equalizer. It didn’t matter if you were wealthy or poor. It was a wall of water thirty feet high. That’s what I told them when I gave a talk at the Rotary club – I had them look at the ten-foot ceiling. They looked at me like, ‘Where are you going with this?’ Then I asked them to imagine a wall of water three times that ceiling…”

Bringing up Hurricane Katrina now, says Gray, carries “a negative connotation.” People avert their eyes and sometimes don’t even wait until she’s out of sight before throwing her business card in the trashcan. It’s disheartening, but something she’s willing to grapple with if it brings some good to the stricken area.

Her son Adam interjects that sometimes he has witnessed attitudes that are downright exploitative or inhumane. When he was down there last, there were signs all over the area exhorting people to “Sell Your Home for $5,000.” It was like that even early on, he notes, “People were packed into cargo planes like slaves, couldn’t tell their families where they were going.” Some believed, says Adam as he shakes his head, that those areas were “meant to be wiped out.”

Art of the Storm 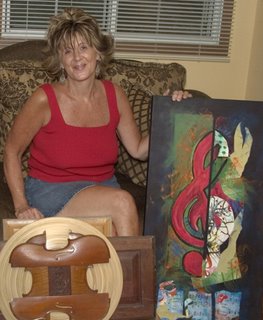 Before we get too deeply enmired in the politics of the past, Gray sweeps in to refocus our interview on the future. She insists that the important thing is getting the job done rather than focusing on individual beliefs and motivations. “This is not about me, not about making money, has nothing to do with my beliefs” - it’s about providing aid and comfort to those who have suffered traumatic, life-altering losses.

Since its start last September, Minnesota Helpers has evolved from an organization that provided temporary housing solutions, to supporting efforts to rebuild lives along the coast. Earlier this year, Gray’s efforts prompted the city of Wayzata to officially adopt Bay St. Louis, Mississippi as a Sister City. “They had a lot in common – both boat communities, with an artistic base.”

On her way home from the adoption ceremony, an idea occurred to Gray: Why not help Mississippi Gulf Coast artists find a way to get themselves back on their feet? USA Today once identified Bay St. Louis as among the top three best small art towns in the United States. Today, artists have been left without homes, much less studios and art materials to work with. There are no local galleries available to show their work, nor patrons who are looking to buy. Gray asked, “Who’s going to go to the town when there’s no reason to go there?”

The Art Share program was inspired by Gray’s desire to revive the community and help artists return to a self-supporting status. It would also be a way for them to express their experiences with the trauma, and to communicate that trauma to others. Gray now works with somewhere around eight art galleries in the Twin Cities area, placing art that has been shipped up from the Mississippi Gulf area. Up until a couple of months ago, not a single agency charged commission on the pieces they sold. Art Share has to date brought somewhere between sixteen to eighteen thousand dollars directly back to the artists who need those funds. Gray has been personally tracking sales and distribution so that she can let artists know exactly what’s going on with their work.

A long-time Florida resident, Gray describes how she first felt to see some of the artwork up on the walls: “I was emotionally stymied by the talent, the Southern richness..that it was hanging on the walls around me because I had asked.” It was a moment where she realized that even just “one person can really pack a wallop.”

Of course, she is not alone. Gray pulls a tremendous amount of support from her son Adam, and from volunteer Kris Stapleton, who she says, has “stuck with it and is constantly there” to help with the pick up and distribution of artwork. Invaluable assistance also comes from Ken and Mary Davidson, Cathy Gray, and Rhonda Blassingame.

Through the entire month of August, MinnesotaHelpers will be paying tribute to the survivors of Hurricane Katrina with a special exhibit at the Hennepin County Government Center. The exhibit, entitled “Art of the Storm,” will feature artwork by Mississippi Katrina survivors. Gray hopes that the event will draw attention to the ongoing plight of hurricane victims and lead to renewed efforts to assist the devastated area.

There will be a display of actual debris from the Mississippi coast, so that visitors can see firsthand the “green patina” (a pervasive mold) that has crept over the waterlogged gulf coast. Gray is also eager for a “touch table” that will allow visitors to handle actual items destroyed in the hurricane.

A reception on August 18th (5-8 pm) will feature the jazz music of Envy, a special documentary, and guest speakers. An impressive assortment of government officials is expected to attend.

“People need art,” says Gray, “80% of people will say that they’re not interested, but we all need art…Every one of us wants to enhance our environment. We decorate our cars with bumper stickers, decorate our homes..” Many of the hurricane survivors have had their immediate needs attended to, but it’s not enough – “the spirit will die. It’s about rebuilding communities, helping artists…people have got to be able to do things to help themselves.”

Wow -- what a great post. I run a web site dedicated to helping people build a life of wealth and wellbeing, and would like to pass this info along to my readers, as well as find a way to help out in some way. Again, thanks for the post.
Alyson ~ FindYourProsperity.com

Just wanted to say thanks for coming out and spreading the word about what we're trying to accomplish.